Myth: Voting no on Prop 16 means no affirmative action

Fact: Voting No on Prop 16 means to disallow considering race into government decisions. Affirmative action has always been legal in California. What’s at stake today is race-based affirmative action. We can help the needy in so many other ways without being divisive. See The Case for Race-Blind Affirmative Action. Programs targeted toward women and minorities are also legal today – but the state just can’t make admissions decisions or exclude on factors like race. With its laws today, California leads the nation in racial and gender equality.

Myth: Proposition 209 has prevented equal opportunity in California education, and we must repeal it rectify wrongs

Fact: Proposition 209 is equal opportunity. The students accepted to our public university systems closely represent the pool of students who apply. Adding race as a factor would only divide us

Myth: Since some groups have different starting point from other groups, targeting programs by race is the best way to address inequalities

Myth: Colleges that use race and ethnicity in decisions do so only as a minor factor, and adding it would not lead to large changes in treatment based on race.

Fact: The admissions rate in California for all ethnic groups is nearly identical. Before the passage of Prop 209, the Pacific Research Institute did a study in 1995 and found that some ethnic groups were 13-14 times less likely to be accepted to medical school than those receiving preferences.

Meanwhile, in cases where race is considered such as at medical schools nationally, this is the result:

Fact: Diversity in California schools has continued to flourish under Prop 209

Myth: A majority of Americans, support race-based affirmative action. It’s only a small minority who don’t believe so.

Fact: A majority of all Americans oppose the use of race in college admissions.

Fact: Considering race and ethnicity in college admissions decisions, which Prop 16 would do, is one of the least popular policies to address inequality. Even among Democrats, less than 40% approve. Meanwhile, creating more magnet schools, a non-divisive solution, has over 80% popularity.

Myth: Women in California are falling behind those in other states due to today’s policies

Fact: Thanks to the strong legal protections in California, the gender pay gap is in California is the smallest of all 50 states. California also has one of the strongest equal pay laws in the country. Existing law prohibits gender discrimination, and requires equal pay for equal work.

Myth: Legacy students are the real problem at universities in terms of unfair admissions

Fact: The University of California and California State University does not use legacy admissions. Similarly, the data for Harvard shows what happens even without legacies and recruited athletes.

Fact: California is allowed to engage in good-faith affirmative action to promote minority and women-owned businesses. Discrimination is already illegal in employment and government contracting. By keeping the playing field fair, Proposition 209 has also saved the state over a billion of dollars in contracting since its passage – a study has found 5.4% lower transportation contracting costs.

Myth: We must consider race in order to rectify issues of poverty

Myth: Standardized tests are racist and do not reflect student performance.

Fact: The UC task force studying the SATs recommended keeping them because they could help identify black, Latino, and low-income students who may otherwise be overlooked, and that tests were not being used in a racially biased manner. Standardized tests have extremely high predictive value and are not racially discriminatory, unlike admissions officers who often make arbitrary value judgments. Standardized tests help disadvantaged students get into college and are one of the fairest parts about the admissions process, unlike wealthy parents who can bribe their way into schools. Luckily, the UC admissions process does not use factors like legacy status or donations, relying on more objective factors and ensuring a fair playing field.

This is an example of an SAT question: 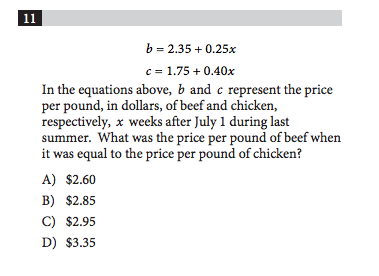 Myth: Prop 16 will not result in any quotas

Fact: Contracting set-asides target a specific percentage of contracts for certain groups, which is a hard, numerical quota. In college admissions, where quotas have been ruled unconstitutional, Prop 16 will result in soft, hidden, and de facto quotas, due to the behavior of government and authorities trying to achieve their desired targets.

Why do you need to add race as a factor to achieve a target of representation, if you aren’t targeting soft racial quotas? See targets from legislators.

Myth: We must consider race in order to rectify issues of racial privilege and rectify past discrimination

Fact: UC system acceptances by ethnic group and by gender closely represent the students who apply. Many students in California choose to go to private schools, out of state schools, and even study internationally. Similarly, comparing only public high school enrollment ignores students who may not be part of the traditional educational system, who may be attending private and religious schools, being home schooled, or participating in alternative study programs. Similarly, the UC system is happy to welcome students who hail from other parts of America and all over the world. Many UC campuses have student bodies that are over 30% out-of-state, and the UC system preferentially accepts out-of-state students to help fill their budget.

Myth: Prop 16 would create equal opportunity for all

Myth: A few wealthy donors are behind the attempt to preserve Proposition 209

Fact: The fight to stop Proposition 16 is lead by a wide range of grassroots supporters without any $1.5M donations. Meanwhile as of August 3, most of Prop 16’s funding comes from a single $1.5M donation from a wealthy real estate developer family. The fight to protect equal rights and Proposition 209 in 2014 was also led by a huge number of grassroots volunteer groups.

Myth: Prop 16 opponents are only conservatives, or a tiny minority of a certain ethnic group

Fact: The Stop Prop 16 rejects all forms of racial prejudice and discrimination, including from the government. The Stop Prop 16 grassroots group includes a huge variety of diverse supporters, including Democrats, independents, and Republicans alike. Official endorsements for Californians for Equal Rights also include Democrats, independents, and Republicans. Speakers at our events have included local, state and congressional candidates Ritesh Tandon, Carlos Rafael Cruz, Aparna Madireddi, Michael Goldman, and the listed below:

Myth: Minority groups who oppose racial preferences are being used as a model minority racial wedge and mascot/puppet by others.

Fact: Minority groups who oppose racial preferences do so out of their own accord. To say that minorities who support Prop 209 are being controlled as puppets is a racist mindset that denies people their agency to choose their own beliefs. Americans who decide to fight for equal rights for all, will not be attacked and labeled as “buying into a model minority” myth.

Fact: California has many policies promoting gender equality – currently women make up 53% of UC students. Additionally, many schools around the country actually practice a type of “affirmative action for men” as described by law professor Gail Heriot.

Myth: Privilege and need can be determined based on a social construction called race with a few checkboxes

Fact: People’s experiences are all unique and thus we should consider each person’s experience uniquely. Two people who fall under the Hispanic, or white, or African American, or Asian American bucket can have entirely different levels of family background, wealth, and socioeconomic status.

Myth: Race-neutral policies such as those in Proposition 209 won’t allow California schools to achieve better diversity

Fact: Race-neutral policies like in Proposition 209 can work great at creating diverse classes, but require more work – see The Century Foundation’s report on achieving better diversity. According to the report’s author, Robert Kahlenberg, “Because it is much cheaper to provide racial preferences to upper middle class Latino and African American students than it is to do the hard work of recruiting economically disadvantaged and working-class Latino and African American students, I fear that many of these progressive reforms could be diluted if 209 is repealed.”

Myth: Adding race as a factor to the current 14 admissions factors will only lead to a small effect for applicants from different backgrounds

Fact: This is what happens when race is considered in admissions at Harvard – even when legacies and athletes are already excluded. Looking at the data from the analysis, the factor causing the huge divergence in admissions rates was the demographic factor.

Fact: Asian American admissions rates, which were the lowest of all groups besides international students before Prop 209, went up at UC Berkeley from 1997 to 1998, when Prop 209 was implemented. The same is true for many other schools. Additionally, the percentage of applicants who declined to state their race tripled from 5% to 15% from 1997 to 1998. In the last three decades, the admissions rate for all students has then fallen, due to the great increase in our population. [Source]

Myth: State leaders should focus on ACA 5 and Prop 16 instead of COVID-19. Prop 16 will help fight COVID-19

Fact: Passing Prop 16 will allow state leaders to enact discriminatory policies that have been suggested in the news, which could include giving people vaccines in order based on their skin color, rather than their individual circumstances and likelihood of exposure.

Fact: Public schools in California such as the UC and CSU systems do NOT consider legacy status when students apply. Repealing Prop 209 would not affect legacy admissions, which happen at private schools.

Myth: Prop 16 will bring equal opportunity for all

Fact: We already have equal opportunity for all. Prop 16 will try to give preferences to try and achieve equal outcomes.

Myth: Californians from minority backgrounds who do not support Prop 16 are supporting white supremacy

Fact: Californians from all backgrounds who oppose Prop 16 do so on the principles of equality, justice, and liberty for all.

Myth: Asian Americans are privileged and do not face discrimination

Myth: Statistics show that race will only be a minor factor and a tiebreaker in admissions decisions, and never a determining factor.

Similarly, an R^2 analysis run by the same study found that in 1994, race and ethnicity held a ~48% explanatory power in admissions decisions at UC Berkeley. After Prop 209, in 1998, this dropped to only ~5%.

Finally, a look at the official UC Berkeley admissions policy material from before 1998 shows the clear usage of ethnicity:

The case for race-blind affirmative action

The painful truth about affirmative action

The Effects of Proposition 209 on California (Higher Education, Public Employment, and Contracting: 2020 Update)